LandGlass Glass Tempering Furnace in IndiaFuso Glass is a leading enterprise in Indian glass processing industry, as well as one of the largest glass manufacturers in the country with factories in Chennai, Hyderabad, and Mumbai. Their products are widely used for many landmark constructions in India. Fuso has supplied glasses for 18 Airports in India including major airports of cities like Delhi, Mumbai, Hyderabad, Bengaluru as well as Glazing for Infosys Technologies Campus , Hyderabad and Facade Glazing for Anna Centenary Library , Chennai. Meanwhile, Fuso has also supplied glasses to major IT parks of TCS, Infosys, and exported 35,000 sqmtr of glass for Vision Exchange project in Singapore recently. Now Fuso is expecting to work with more world-renowned multinational companies and increase the company’s visibility worldwide.

Recently, Fuso Glass had an opportunity to cooperate with an industrial leader, Saint-Gobain of France. Saint-Gobain is well known in the industry for its stringent requirements on partners’product quality, technical competence, and comprehensive strength. Thus, whether the tempered glass sampled from different batches and of different models can successfully pass each and every Saint-Gobain’s test became one of the determining factors for the cooperation. For this purpose, technical inspectors of Saint-Gobain spent days at Fuso Glass facilities, testing repetitively with various equipment the surface stress, waviness, and edge kink of single silver, double silver, triple silver Low-e tempered and semi-tempered glass with different specifications made by the glass tempering furnace at Fuso Glass. “We are happy with the machine and the products” said by Saint-Gobain’s inspectors to Fuso Glass’ director, Mr. Ashok Jain. At present, the two parties are discussing further about the project. The glass tempering furnace that played the key role during this examination is the Cyclone series glass tempering furnace designed by LandGlass in 2015. 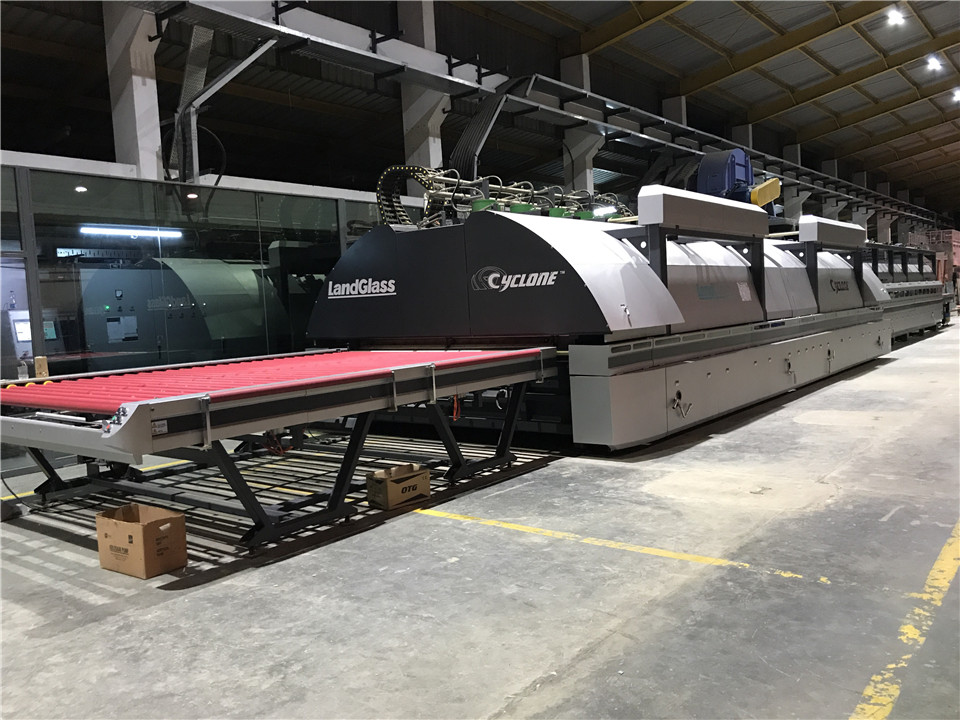 In fact, this is the third glass tempering furnace Fuso Glass has purchased from LandGlass. As early as seven years ago, Fuso Glass already purchased two full Jetconvection glass tempering furnaces from LandGlass. Since then, the good running condition of the machine and considerate after-sales service provided by LandGlass has totally exceeded Mr. Ashok Jain’s expectations. Accordingly, in 2016, when the market demands for high quality Low-e glass increased, Mr. Ashok Jain ordered without hesitation the latest high-end glass tempering machine from LandGlass -- Cyclone series glass tempering furnace, in order to fulfill the growing orders. Once again, it is proved that LandGlass Cyclone is trustworthy. Within the first three months of commissioning of its First LandGlass Cyclone, Fuso has already backed major projects from IT giant Wipro, Lulu, Transasia, ITC and from renowned fabricators like Mero Asia Pacific, Glass Wall Systems and Alufit India.

Due to the outstanding performance of the Cyclone series glass tempering furnace during the Saint-Gobain project, Mr. Ashok Jain came to China in August this year. In addition to expressing his thankfulness, he ordered another Cyclone series glass tempering furnace. He kept saying that “Fuso Glass and LandGlass are a family, we mutually have the absolute trust. I believe LandGlass. I believe your machine and service”.

Seven years ago, Fuso Glass for the first time, worked with LandGlass. Seven years later, the two companies worked together again. Seven-year is a cycle. During this period, we have improved our product quality with advanced technologies, gained trust from customers by fulfilling our responsibilities, and won the market through our hard working! We look forward to seeing what we can achieve in the upcoming seven years!

Previous Next
Recommendation
more
2016-09-18
The Praise from a Customer Overseas
On November 11, 2015, after-sales department of LandGlass were excited about a letter they just received from a customer in U.S. It said that “LandGla…
more
2020-04-22
LandGlass installs a new UltraJet Jumbo Glass Tempering Machine at Cristalería Crevillente
Together with Aries, our partner in Spain, who is specialized in technological solutions for the production of safety glass, we have just installed a glass t…
more
2021-06-05
Five LandGlass Glass Tempering Furnaces at Haiyang Shunda Glass
Aiming to be a world-class economic, financial, and technological center aligned with the Shenzhen Special Economic Zone and Shanghai Pudong New Area, …
more
2020-10-16
Brand is a Promise
After 14 days in quarantine, the installation engineers from LandGlass finally arrived at SKG of South Korea by the end of August 2020. Neither pandem…
more