On December 29, 2019, Xinhua News Agency reported on Henan under the headline “An Open Inland Province”: giving a warm approval to Henan’s opening-up practice. In fact, while moving from the hinterland to the frontier of the opening-up, an open Henan has been a recognized brand name.

“In this context, it is necessary for cities such as Zhengzhou and Luoyang to implement the policy to allow a 144-hour visa-free transit.” During the break of the third meeting of the twelfth Henan provincial CPPCC session, Mr. Zhao Yan, the provincial CPPCC member and chairman of the board of Luoyang LandGlass Technology Co., Ltd., said to the reporter that a more open Henan will empower the province for more dynamic development. 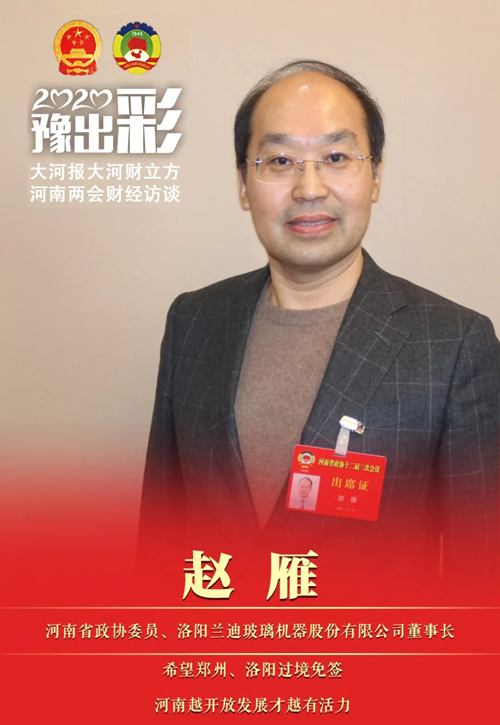 The Visa-free Transit in Zhengzhou and Luoyang is Expected to

Stimulate a New Round of Development in Henan

During the two sessions this year, opening-up is the main issue of Mr. Zhao’s concern. He told the reporter that foreign friends who visit Zhengzhou and Luoyang deserve a 7-day visa free stay in these cities, which would provide them great convenience to visit Henan for leisure, investment, or business purposes while raising the levels of overall openness in the province.

It is understood that with China’s further opening-up, the State Council has approved to extend the visa-free transit in Chongqing and Xi’an aviation control points to 144 hours and implement the 144-hour visa free transit in Ningbo aviation control point as a part of integrated Shanghai-Hangzhou-Ningbo policies starting from December 1, 2019. As of December 1, 2019, there are already 18 provinces (autonomous regions and municipalities), 23 cities and 30 ports nationwide that have received the approval of the State Council to offer 144-hour or 72-hour visa-free transit to visitors from 53 countries.

Therefore, Mr. Zhao believes that the key cities in Henan should also apply for 144-hour visa-free permit as soon as possible. Zhengzhou aviation port should on the top of this list. He said that from the data released, the foreign trade of Henan achieved fruitful outcome in 2018 with total import and export exceeding 550 billion yuan for the first time of which Zhengzhou accounted for 70%.  Furthermore, several fast growing cities in the province are all located nearby.  In order to promote the province’s overall development of foreign trade, Zhengzhou should obtain such preferential policy.  “144-Hour visa-free transit is a proven policy that will generate positive effect on the development of foreign trade. As the leading province in the central region, Henan should endeavor for such permission.” He also said that out of the applicable countries and regions, 24 are located along the route of “One Belt One Road” initiative, 25 are the developed economies identified by the World Monetary Fund, and 4 are economically active regions in Central and South America. Therefore, from the standpoint of either the national policy or the level of actual economic activities, this policy benefits basically all of China’s international trade partners.

As Henan Cultivates a Large Number of Talents

Enterprises Should Make the Most of This Resource

He told the reporter that the Talent Recruitment & Project Matchmaking Event sponsored by the government provided a great platform to facilitate the communication between enterprises and talents. “Generally speaking, there are great resources of talents in Henan. Many enterprises haven’t made enough efforts in talent recruitment.” Mr. Zhao said that he once followed up with several doctorates. However, after a few years of contacts, none of them chose to stay in Henan for their career development. He felt particularly sorry for their decision.

Other than talents, Mr. Zhao also pays special attention to the core technology. The past experiences told him that technology is one of the top priorities in corporate development. In particular, he told the reporter that his company has always been looking for something that makes them special. In his view, the only opportunity for a successful “overtaking on bends” in a business racing is the realization of technological supremacy.

Devoting 12 Years of Efforts on the

“In the industry of vacuum insulated glass, we have devoted over a decade, even though this product did not bring us any profit in the past twelve years.” When it comes to putting decisions into action, Mr. Zhao, who is always gentle and polite in communication with others, will immediately become a tough guy. As he told the reporter, being a high-tech enterprise, LandGlass has given special attention to the investment in research and development. After years of efforts, the company has now successfully developed the world’s only flexible tempered vacuum insulated glass - LandVac®. The product has overcome many limitations of traditional vacuum insulated glass in terms of safety, Eco-friendliness, and production output.

On October 4, 2019, when LandGlass unveiled its LandVac tempered vacuum insulated glass at the VITRUM, it quickly drew the attention of many foreign customers. With its outstanding performance in energy efficiency and noise reduction, the product has found a wide range of applications in the overseas markets of energy-saving buildings, intelligent household appliances, transportation, and national defense.

Mr. Zhao was happy to inform the reporter that more than 50% of their products are now exported to foreign countries. Thanks to the new product, LandGlass’ overseas sales business in 2019 has achieved a substantial increase with its sales volume reaching a record high. In the European region, the products of LandGlass can be found in the world renowned glass processing companies. They are now well recognized by foreign companies in the field of glass tempering furnace for oversized and complex curvature glass.

As an innovation-driven private enterprise, LandGlass has built up a highly competent R&D team to continuously explore the possibilities in products based on market demand and received great results in self-developed innovations. At present, LandGlass owns several hundreds of domestic and foreign licensed patents and has won the National Patent Gold Award for two consecutive years. In 2018, it ranked among the “China’s Top 1000 Innovative Enterprises” and was named one of the national intellectual property demonstration enterprises. LandGlass has embarked on a path to success through innovation driven product upgrading and intellectual property supported growth.

“Why do some enterprises do better than the others? Because they have been constantly pursuing to surpass the ordinary standard.” Speaking of the concept of enterprise development, Mr. Zhao said that a company should never look at its revenue only. Instead, they should focus on the strength of their core competitive advantages which determine how far they can go in the future.

Copyright Notice: The copyright of this article is owned by DaHe Fortune Cube. No website shall make reference to, copy, reproduce, adapt, or disclose its contents without written authorization.

Previous Next
Recommendation
more
23.11.2017
LandGlass Recognized as Innovative Leading Company in Henan Province
On November 19, 2017, upon successfully passing the review carried out by the Science and Technology Department of Henan Province, LandGlass is recogni…
more
18.09.2013
Let's Meet at VITRUM in This Golden Autumn
The 18th edition of Vitrum, an international biennial trade fair for machinery, equipment and systems for the processing of flat and hollow glass, glass and f…
more
23.08.2019
LandGlass Awards Grants to the Children of Employees
All those years of nose-to-the-grindstone is for one moment of glory. On the morning of August 21, LandGlass held the ceremony at the company’s headquarte…
more
22.10.2018
LandGlass Is Going to Attend Glasstech Asia 2018
Date:November 14 - 16, 2018Venue:Booth No. F24, MITEC, MalaysiaIntroduction:GLASSTECH ASIA is the largest international glass expo in …
more